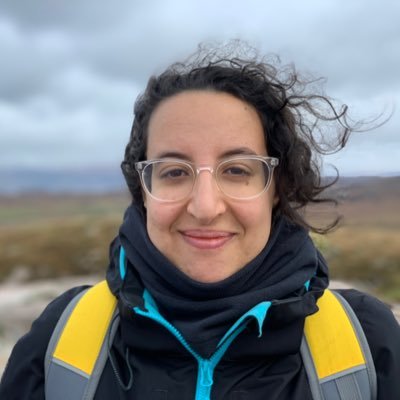 Nigeria in 2003 held more than one election in the same month.It started with the House of the representative and Senate elections on the same day, 12th of April 2003. Then the presidential election was held on 19th of April 2003. Then on the 3rd of May 2003, the National Assembly election was conducted. According to the data collected by HRW, violence started earlier in Delta state from January to March as it is the most oil-producing state in Nigeria. The violent incidents included clashes between different ethnic groups and other clashes between armed groups and security forces. The most violent incidents were on 12th and 19th of April and the 3rd of May (on election days(s) violence). In most of the incidents the ruling party was the main perpetrator. Some incidents started earlier on 10th and 11th and some took place during the first three days of May. The violence started on 10th of April in Bassambiri area in Bayelsa state in the form of clashing thugs belong to opponent parties. On the 11th different violent incidents took place in different areas (Amadi-amain in River state and Warri in Delta state) in the form of the temporary displacement of people from their homes and attacks waged by the opponent’s party’s supporters.

On 12th of April (the House of the representative and Senate election day) violence broke out in different states and different areas within the same state. Violent incidents were recorded in Bayelsa state, different regions in River state (Amadi-ama, Etche, Ikwerreland and Ogoniland) and in Warri and Ughelli regions in Delta state. The violence took the form of of violent protests, killings of opponent’s parties’ supporters, kidnapping and prevention of election observers from obtaining election results. Violence continued on the 13th of April in Ogoniland in River state by security forces.

The second wave of violence was on the 19th of April (the presidential election day). The incidents took place in Oporoma region in Bayelsa State and in Ogbio-Akpor, Ikwerreland and Port Harcourt regions in River state. The violent incidents were clashes over voting materials, killings in clashes between rival parties’ supporters and repression by security forces in front of peaceful demonstrations.

Violence continued in some states till May. On 3rd of May (the National Assembly election) violent incidents increased again in River state and Delta state. Most if the incidents were clashes and confrontations between armed groups and violence held by security forces (HRW, 2004).

Figure 2.1 to 2.6 show maps of the spatial and temporal diffusion of electoral violence in Nigeria. The maps are cartographied (coloured) based on the level of violence the “0” class reflects no violence, the “1” class means low level of violence like intimidation or harassment, the “2” class means high violent level like assassinations or targeted murder and the “3” class refers to extensive violence like generalized physical attacks and killings. The incidents reported in the HRW report were coded using Stratus and Taylor coding (Straus & Taylor, 2009).

The maps show that violence is concentrated in four main areas Niger Delta states (Delta, Rivers, Imo, Edo and Bayelsa), Middle Belt states (Plateau and Benue), South Central states (Ebonyi, Kogi and Enugu) and South West states (Lagos) and North West states (Sokoto). Although the Niger Delta states are rich in natural resources like oil, they are vulnerable to violence because of the uneven distribution of resources from the oil industry, informal networks of patronage, minorities tension and social fragmentation. Different causes can be found in the Middle states which are terrorism, economic conditions, ethnic and religious polarization. In the South West states there are different armed groups like Eiye, Aiye, Lord, Black Axe, and KK confraternities and the cults conflicts. The drivers of violence in the South Central states are corrupt, ethnicity, unemployment, illiteracy and the existence of gangs. The North West states were calmer compared to the rest of the areas. These states are so diverse socio-economically, they comprise some of the richest and poorest states in Nigeria. This diversity could be the reason behind the rare occurrence of violence (Falola, 1998).

We also can infer from the data and the maps that electoral violence takes the form of parallel incidents in different areas on the election day(s). This pattern may take different forms in different countries. This detailed level of information about locations and times of the violent incidents helps in the prediction and the generation of a statistical assessment tool for violence. Such a tool can predict if violence will take place and when and where it will reach its peak. 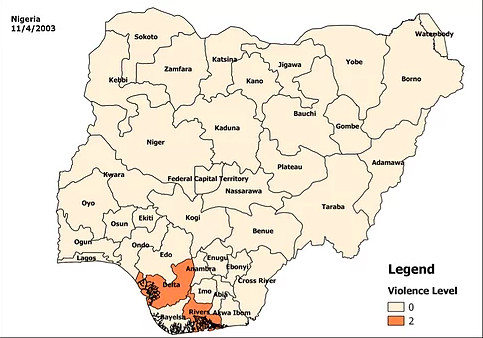 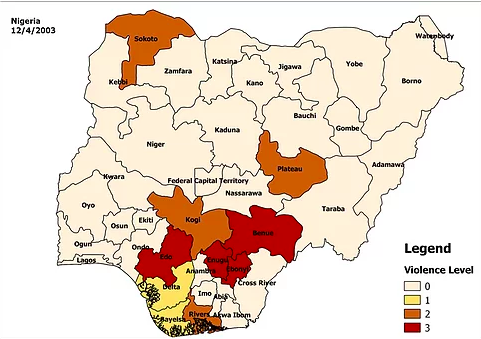 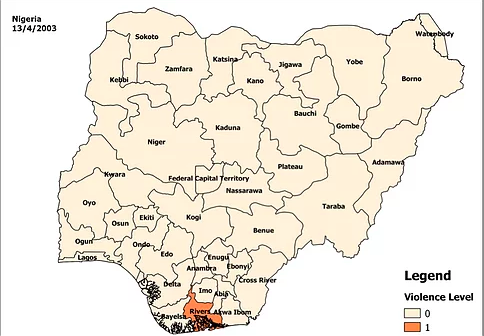 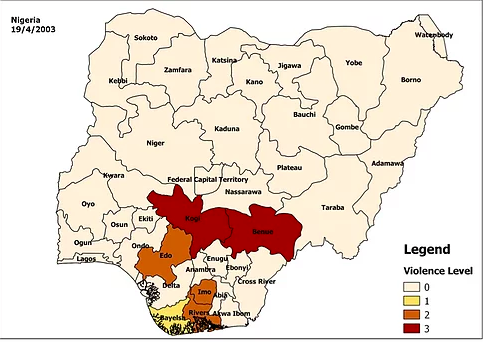 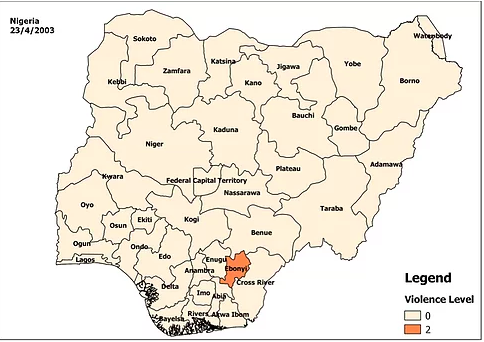 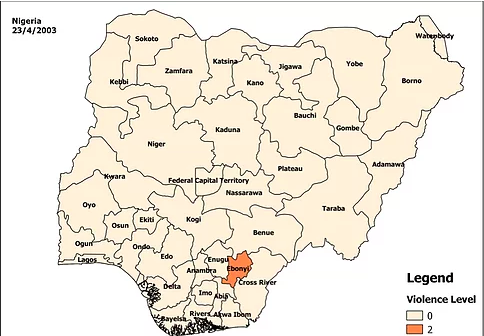 Berenschot, W. (2011). The spatial distribution of riots: Patronage and the instigation of communal violence in Gujarat, India. World Development, 39(2), 221-230.

Fischer, J. (2002). Electoral Conflict And Violence (A strategy for study and prevention). .

Vivanco, E., Olarte, J., Díaz-Cayeros, A., & Magaloni, B. (2014). Drugs, Bullets, and Ballots: The Impact of Violence on the 2012 Presidential Election Mexico’s Evolving Democracy